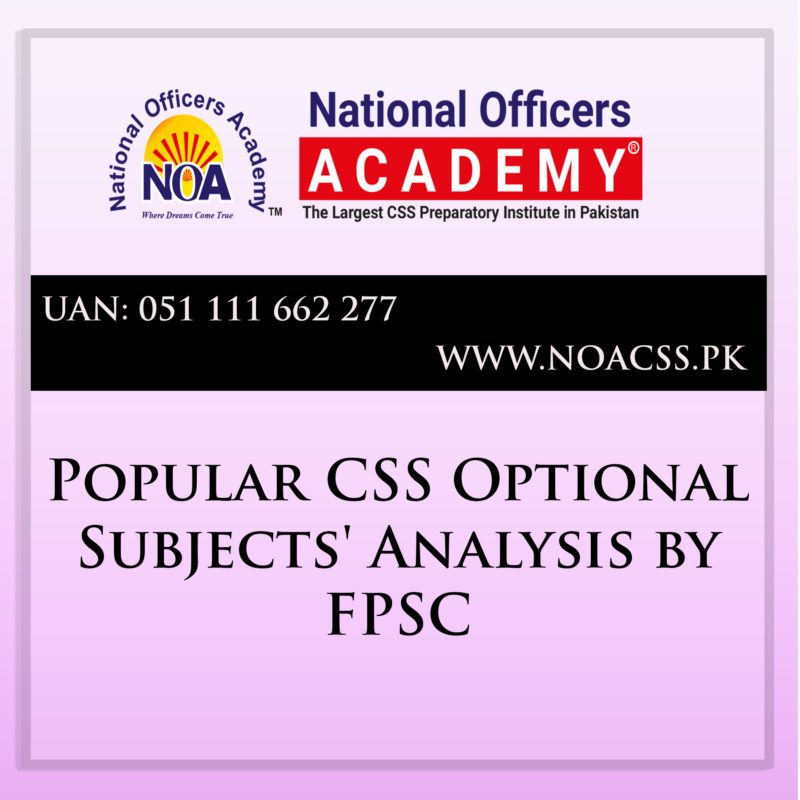 This article focuses on the year 2017 because it is the latest year the Federal Public Service Commission (FPSC) published their report and in that report, it focuses on the most popular subjects. It takes the FPSC approximately 3 years to publish their detailed report that is about 200 pages in length. It covers everything from the students’ parents’ educational background to how many CSS candidates opted for specific subjects.

One thing that must be clarified is the difference between a CSS aspirant and a CSS candidate. A CSS aspirant is anyone who wishes to appear in the examination and qualify. When that aspirant actually appears in the CSS examinations and attempts all the papers, they become a candidate for CSS because they are being considered for the position.

The 2017 report is based on the results of the 2017 Civil Superior Service (CSS) Examinations. That year there were 23,025 CSS applicants, out which a total of 9,391 appeared, only 312 qualified the written examination among whom 2 failed the interviews, and finally 261 candidates were allocated.

The most popular subject from Group 1 was International Relations, with a total of 6,006 CSS candidates opting for the subject. The examiners noted that the overall performance was unsatisfactory. Candidates’ lack of proficiency in English held them back from being able to understand what was being asked from them so they gave irrelevant responses. Answers were given in bullets, which is not required in a theoretical subject and many headings that were in bold had no relevance to the question whatsoever. Candidates even repeated answers and ideas in an effort to fool the examiners, which they found extremely disappointing.

Physics grabbed the title of the most popular subject from Group 2, with a total of 582 CSS candidates opting for it. Group 2 in general remained an unpopular group because the subjects are difficult and often low-scoring. Examiners noted that the candidates appearing in the Physics examination did not have even the most basic knowledge of the subject. They felt that students had not taken the subject seriously and lacked a depth of technical information. Our fast-declining educational standards were obvious from the weak English expression, grammar, and vocabulary.

From Group 3, the most popular subject was Public Administration. Examiners observed that over the past few years, performance in the subject had been declining. And although most questions were analytical, students answered based on rote learning, which led to generic answers. Again, common weaknesses related to English were observed.

US History was the most opted subject in Group 4 and according to examiners, the main reasons for failure were that students simply provided information rather than any form of critical analysis. The answers provided by CSS candidates were identical down to the most basic level and were indicative of imitation of online guides. Hence, there was no originality or critical thinking.

Group 5 led with Gender Studies as 3,718 CSS candidates opted for the subject. Examiners were pleased with the results of this paper. They felt that the “overall quality was good”. However, students tried to explain things from a religious perspective and made sweeping statements, both of which are not acceptable in social sciences.

International Law goes hand in hand with International Relations so it only makes sense that it was the most popular subject from Group 6 with 3,834 CSS candidates opting for it. Examiners posited that overall performance was below the mark and that educational institutions needed to improve their instruction of the subject. However, there were a few exceptions where the performance was excellent.

Finally, Sociology was the winner in Group 7 as 2,700 CSS candidates opted for the subject. Examiners observed that students answered questions in a very general manner rather than providing specific information required by the question. Examiners suggested a detailed review of the literature in order to grasp the depth of the subject rather than focusing on a single book for preparation. As is typical, most students had weak English and lacked the ability to construct a grammatically correct sentence.

Those wanting to take away something from the report will try to improve their English to understand what the examiner is asking of them so they can, at minimum, reach up to the most basic requirement of answering a question. Moreover, they need to remember that there is a specific way to answer questions based on the subject. One would not answer a Geology question the same way they would answer a History question. And most of all, never ever try to make a fool of the examiner because it is insulting on a personal level. Before attempting the CSS examinations, it is very useful to look at feedback from examiners of previous examinations so as not to make the same mistakes they mention lead to failure.

National Officer’s Academy (NOA academy) ensures CSS aspirants not only cover all the course content but that they also know how to attempt the examination of each subject based on its nature and past feedback from examiners. NOA academy offers classes on all of the above subjects with individual guidance for CSS aspirants along with mock CSS examinations. The mock CSS examinations are very useful because they get checked by highly experienced professionals who can provide feedback on mistakes and make sure the student does not answer in a way that examiners would fail.