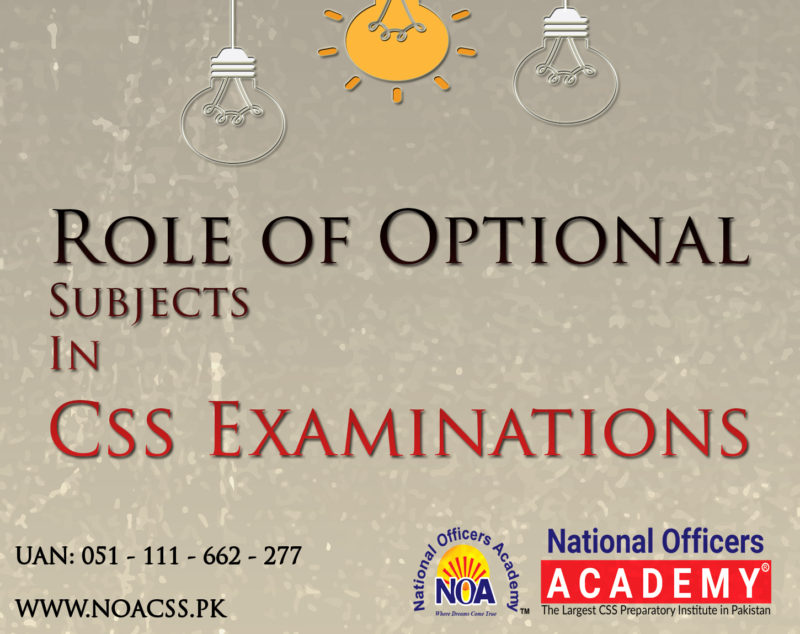 Every student preparing for the Civil Superior Service (CSS) examinations experiences the same dilemma: What should I choose as my optional subjects? The student faces extreme confusion and stress during this process, which is absolutely justified. When faced with compulsory subjects one experiences a sense of acceptance that it is what it is and they only have to prepare well. When it comes to the optional subjects, it is their choice that can either make or break them. This decision should not be taken lightly and the student should be as informed as possible about their options before settling on something.
CSS examinations comprise of a total of 1200 marks worth of subjects. 600 marks worth of exams are compulsory subjects and the other 600 are divided between a selection of 45 subjects that are further divided into 7 groups. One must score a minimum of 40% to pass in the compulsory subjects and a minimum of 33% in the optional subjects. Some of the optional subjects are worth 200 marks each but that does not mean they only have one exam; for example, Economics is worth 200 marks but it consists of paper I and paper II.
There are 2 groups that have optional subjects worth 200 marks each, which means that hypothetically a student can choose as few as 4 optional subjects, which would look something like: Accountancy and Auditing (200), Applied Mathematics (200), Business Administration (100), and US History (100). More commonly, students opt for 5 optional subjects with only 1 of them being worth 200 marks.
Many people will argue it is a myth that there are some high-scoring subjects and some low-scoring subjects, but this is not a myth in any way, shape, or form. To prove this, one can simply look at past trends and determine on their own what seems logical and valid to them. Computer Science had been consistently delivering low scores until 2016 and since then the average scores have increased and lie between 130-140 marks. International Relations has been scoring well on every alternate year since 2016 and it is predicted that in 2021 it will not do well. English literature is generally considered a low-scoring subject and scoring more than 55 marks is considered rare. And the provincial languages have been high-scoring subjects for a long time.
Considering all the above data, it would be prudent of any CSS aspirant to select their optional subjects based on past trends and statistics so they may choose those that deliver the highest marks. Those who pass the CSS examinations are allocated based on their scores and in an effort to achieve as high a score as possible, it only makes sense that one chooses optional subjects raking in the highest marks because compulsory subjects are not known for being as generous. On an average, students barely attain passing marks in compulsory subjects; whereas, optional subjects can make the difference of 100 positions in the final result.
At National Officer’s Academy (NOA academy) CSS aspirants have help every step of the way. There are 2 days out of 3 from the orientation that are specially dedicated to optional subjects. On the first day of the orientation, Sir M. Ali Khan (DC-IRS), discusses the entire process of the CSS examinations along with legal and general requirements for attempting and passing. On the second day, Dr. M Atif Ali (CEO of NOA academy), discusses every single one of the 45 optional subjects in detail while providing an in-depth analysis of their past trends and scores. Finally, on the third day, several members on the NOA academy staff have individual sessions with each student and help them select their optional subjects based on their professional experience and knowledge. Students end up feeling assured and satisfied with their choices because they received high-quality guidance.