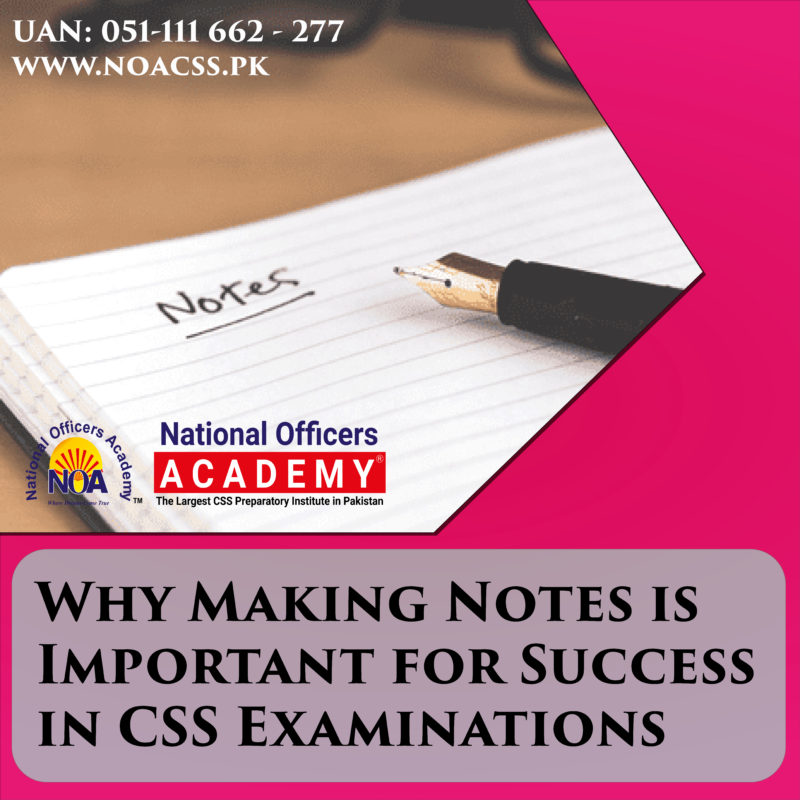 Making notes is an integral part of the preparation for the Civil Superior Service (CSS) examinations. Some would go as far as arguing that how one makes notes can determine their success in the CSS results. How one makes notes depends on them but one thing is certain that the simple act of making notes can separate a passing candidate from a failing one.
There are several reasons why note-taking is important and the most significant one is that the act of taking notes allows for better memorization. The human brain is better able to process information while writing it down and according to the Huffington Post, not only does writing something down help one memorize it better, it also improves their overall ability of memorization.
Due to the fact that human body cannot physically keep up with the brain at the same speed, it processes information differently to help eliminate the buffer-time. This means that when someone is studying or taking notes in class, they cannot write as fast as their mind is working so they create keywords in order to process information better. When the mind does this, it categorizes and stores information in a way that facilitates memorization that could not be achieved from typing notes, reading or listening alone.
When studying for the CSS examinations, there is a massive amount of information one needs to process and study, which is why categorizing and organizing information is extremely helpful. Allowing the mind do this on its own during the process of writing down notes is even more useful because those notes can be used at a later period in time for revision. There is so much content that it takes several months to prepare and at the end, revision is not just advised, it is absolutely necessary for a good CSS result. At which point, reading an entire book or re-watching lectures is too time-consuming. It is much more practical to revise from notes as they are a condensed form of everything one has learned over a period of time.
Besides memorization, note-taking during lectures and while studying is useful because it keeps the mind engaged and awake. Very often, reading makes one sleepy, especially when it is academic reading, since the subjects can be dry and lengthy. Writing when studying will keep one busy and less distracted while the hands remain busy with something productive rather than itching to pick up that phone and check social media.
Everyone who plans on appearing in the CSS examinations knows that it requires a lot of writing and that for a good CSS result they must write as much as they can. By the end of the last paper, one’s hands begin to feel as if they are about to fall off but it is necessary to keep going on and maintain composure. Just like a marathon where the runner practices running to increase stamina over time, writing requires practice to increase stamina as well. An easy way to build that stamina is by taking notes and exercising those muscles. It will also allow the student to improve their handwriting in a situation where they have to write very fast.
National Officer’s Academy (NOA academy) helps students in every aspect of their preparation, even when it comes to note-taking. Students receive personal guidance on how to take notes, from what pen to use to what paper is best suited. NOA academy’s teachers’ lectures are so in-depth and informative that the student will be forced to take notes to store all the information. If a student believes they can piggyback off someone else’s notes or the teacher’s PowerPoint presentations, they are sorely mistaken. NOA academy believes in adopting the best and most smart method of studying, which includes taking notes.