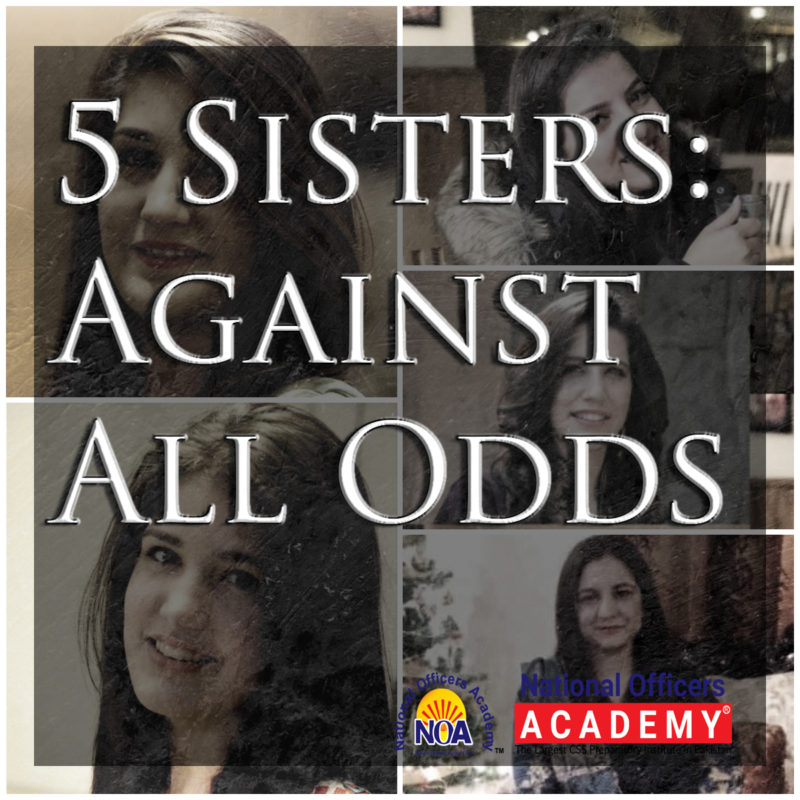 Pakistan has some of the lowest literacy rates in the world. According to the Central Asian Institute, in 2017, only 5 out of 10 school-aged children are receiving an education and only 6% receive college degrees. Unfortunately, both sexes have low literacy rates and an article published by The Nation states that 41% of the illiterate population are male; whereas, 65% are female. There are several reasons influencing this disparity in education based on gender; however, one thing is clear that gaining an education as a female is statistically difficult as compared to that of a male.

The same world that made it difficult for females to succeed in life and achieve their goals, gave us women who defy all odds and conquer mountains of challenges to make their dreams come true. One such story is that of the 5 “Sher Sisters”, Laila, Shireen, Sassi, Marvi and Zoha Malik Sher. Their accomplishment is no mere feat, although they make it seem supremely easy. It would be arrogant of one to say what they achieved is not newsworthy.

Many people experience some form of fame after passing the CSS examinations, but only few have become as famous as the Sher sisters. They made national headlines when the youngest of 5, Zoha Malik Sher, passed her written examination in 2019. People were stunned after hearing that all the sisters were successful. Many wondered if it was hard-work, coincidence, or plain old luck, and some even went as far as saying it was all nepotism.

I have met the sisters and I can say I was pleasantly surprised each time. They are humble, funny, kind, polite and encouraging. Like many, I assumed they would be stuck-up because of their fame and success, but I am so grateful for being proven wrong. The world should know that beyond their success and fame, they are individuals who truly did struggle for their place in the world.

The Sher Sisters belong to Haripur, KhyberPakhtunkhwa and all attended Convent, Rawalpindi for their early schooling. Their mother, Khurshid Begum, is a Homemaker and their father, Malik Rafiq Awan, is a retired SDO from WAPDA. In an interview with National Officer’s Academy, Zoha recalls the story behind her name. She happily reminisced about the day she asked her father why she wasn’t named after a character in a romantic folktale like her older sisters and found out that he named her after Surah Zuha, which is considered an anti-depressant and means “the first ray of morning sunshine”. When she was born, her extended relatives were disappointed at the birth of a daughter; however, for her father, the birth of a healthy baby girl was like the first ray of morning sunshine.

Laila Malik Sher was the first among the Sher Sisters to pass the examination, paving the way for her younger sisters. As a fresh graduate from Punjab University with a B.A in English Literature she was allocated at the post of Assistant Commissioner IRS only to be the youngest CSP officer in Pakistan at the age of 21. It is no wonder that her favorite quote is, “Whatever you put into the universe will come back to you”.

The second sister is Shireen Malik Sher, who calls herself a problem-solver and good negotiator, has an MBA in Human Resources Management. She passed in 2010 and was allocated in the Office Management Group. She currently serves at the Director of the National Highway Authority in Islamabad. Her favorite quote is, “I took the road less traveled by and it made all the difference”.

The third sister, Sassi Malik Sher, has a whimsical favorite quote, “those who do not believe in magic will never find it”. It seems that she found her magic in CSS after completing her MBBS from Khyber Medical College, Peshawar. She currently serves as the Deputy Executive CEO, Chaklala Cantt, Rawalpindi. In one of her interviews she happily recalled her silly mistakes when she joined NOA academy, specifically when she mistakenly wrote CPEC as “Sea Pact” and Militia as “Malaysia” during one of her Current Affairs classes. Her reason for recalling this was to show that regardless of her success, everyone starts in the same place, which is right at the beginning.

The fourth of the sisters is Marvi Malik Sher lives by the quote, “Where there is a will, there’s a way” and she used the strength of her will to make her dream come true by passing the CSS examinations in 2017. She has a Master’s degree in Sociology from Quaid e Azam University and is now serving as the Additional Assistant Commissioner in Abbottabad.

Last but not the least, there’s Zoha Malik Sher, who is the youngest of the bunch and passed CSS in 2019 receiving allocation the Office Management Group. She has an M.Sc in International Relations, which is why she says she felt extra pressure to do well in the subject in CSS making it more challenging than it should have been. Her favorite quote is, “I think; therefore, I am”, which is fitting for her life story.

No matter what anyone says, passing CSS is not, by any means, an easy task. The 5 sisters received all their education in Pakistan from local and government institutions. They gave their preparation due effort and ended up proving that with hard work and the right guidance, it is very much possible to pass the examination. They were all students of NOA academy and one by one came here for the guidance and help they needed in becoming the success story they are today.