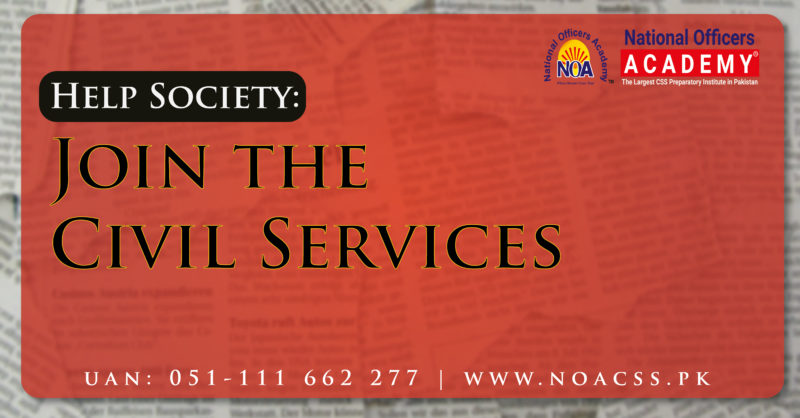 Almost everyone can claim that they want to help society; however, only some make the effort and others lack the capacity. Fortunately, there are few with both qualities who apply their capacity toward making an effort. Such people are the Civil Servants of Pakistan who work tireless to ensure the rights of citizens and help carry out the will of the government and its people.

Civil servants act as the bridge between the government and citizens ensuring the provision of basic facilities and rights. As a civil servant, one has the ability to assert tangible change in people’s lives and make a real difference. Many of them work in the field directly with the people they are serving, allowing them to have an unadulterated version of the circumstances. However, unlike most people, they also have the power to help.

With the privilege of assessing circumstances firsthand, civil servants are in the unique position of being an agent of change. As part of the Executive branch of government, they can provide input on policies and demand change where it is most needed. They can help improve the government’s ability to serve its people’s needs. If there is a policy that does not exist or if there is a faulty policy that seems perfect on paper but practically flawed, it is the civil servant who will help build or rebuild it.

Apart from being the agents of change, when it comes to policy-making, a civil servant is also the very person who applies those policies in practical use. They are in a position to implement the policies they helped build in the true form they were meant to be. They can act as the safeguards of what they built and guarantee its ethical application.

As a Police Service Pakistan Officer, a civil servant has the authority to influence people’s lives directly by using their judgment in the field. This is a great responsibility but for those who have a strong moral compass and need for justice, they can use this platform to defend the weak and deliver justice. Similarly, a Foreign Services Officer can help change the world and represent Pakistan in a positive light on an international platform.