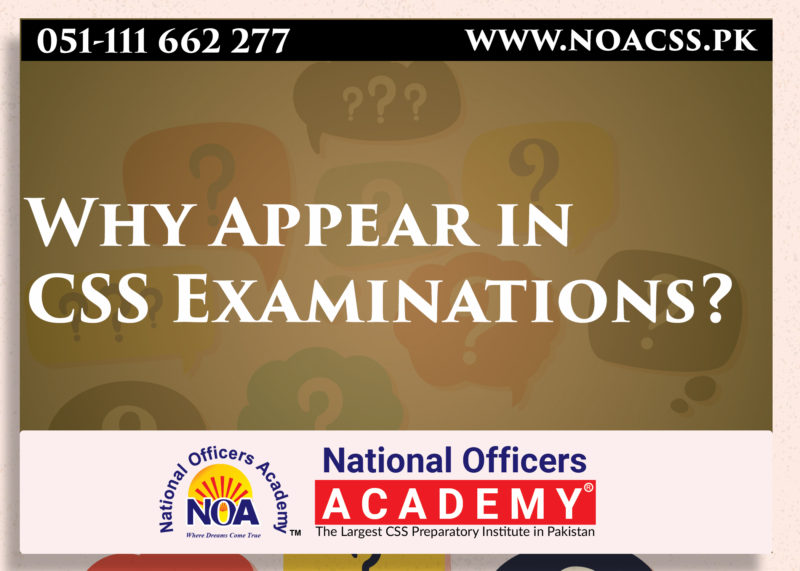 Why attempt CSS – the Civil Service Exams – is a question every Pakistani should ask themselves when they reach the age of 21. So many people lose the opportunity of pursuing CSS or do not even think about it because the idea never crosses their minds. Others hear about CSS but never consider it because they know it as the “Big Bad Wolf”. Then there are those who consider it but never attempt it because, once again, they underestimate their abilities or let others talk them out of it. Finally, a few thousands are left out of the entire Pakistani population between the ages of 21 and 30 who apply for the exam and by the end of exam week, only about half the number of applicants actually make it through the examination.

It may sound scary but it is true that CSS is the most competitive examination in Pakistan; however, when one gets into the nitty gritty, they learn who their real competition is. As it turns out, one is essentially competing against the candidates from their own province. The CSS allocations are based on quotas, including a women’s quota. After one passes, it all depends on the number of seats available from their province and some quotas even end up with empty seats because there are not enough candidates. Regardless, this article is about why one should consider CSS as a career option and appear in the examination, for which there are several reasons.

First and foremost, as I mentioned in my previous article, “Help Society: Join the Civil Services”, being a Civil Servant of Pakistan is one the greatest platforms one could have for helping those in need. It serves as a bridge between the government and an average citizen. A CSP has the ability to work directly with those who need help and make a positive impact in their lives either directly or via their role in policy-making. Although they do not make the policies, they provide significant input that helps in their creation.

Secondly, it is a job that comes with a lot of respect. People are, more often than not, very impressed and inspired by those who pass CSS and are allocated as Civil Service Officers. This is generally because passing the CSS examinations itself is considered a huge achievement and then a grade 17 government officer also has a lot of authority. They are safeguards of the citizenry and their rights, which is a position that demands respect in its own right.

One of the best advantages of joining the civil services is the job security. Unlike private jobs, once recruited in the civil services, one enjoys high levels of job security. A job is practically guaranteed till retirement and once one reaches the level of a grade 19 officer, the only person who can fire them is the Prime Minister himself. Private jobs do not provide this level of security or comfort, there is constant uncertainty and fear of job loss. Thousands of people lost their jobs during the pandemic lockdown of 2019 but civil servants felt no fear of job loss.

As a government employee, one enjoys many perks. Some of those include a guaranteed salary, health benefits, pension, vacation packages, and in higher grade and more prestigious groups they are provided with living quarters and government issued vehicles. There are also traveling benefits in the form of discounted stays across the country at government rest houses.

Many people attempt CSS in hopes of passing to make their parents proud or to prove their worth. Passing CSS is considered one of the greatest successes in Pakistan. The parents of passers feel like they can hold their heads up high and say they are proud of their children, while the children feel like they have proven their worth in society. Being a civil service officer is one of the biggest honors one could have in Pakistan.

Finally, the immense amount of knowledge one gains while preparing for CSS is almost incomparable. By the time one is done with the entire course and syllabus, they are a new person who has the ability to discuss and debate on almost any topic. Even if one does not pass, they learn so much and grow as a person that the preparation alone is a sufficient accomplishment.

National Officer’s Academy (NOA academy) is a unique educational institute where aspirants are offered courses for the CSS examinations and much more. NOA academy believes that preparation for CSS is not limited to the syllabus; rather, it goes far beyond that, into the psyche of each student and their study habits. It helps nurture each student’s abilities and provides them with the proper tools needed for success.